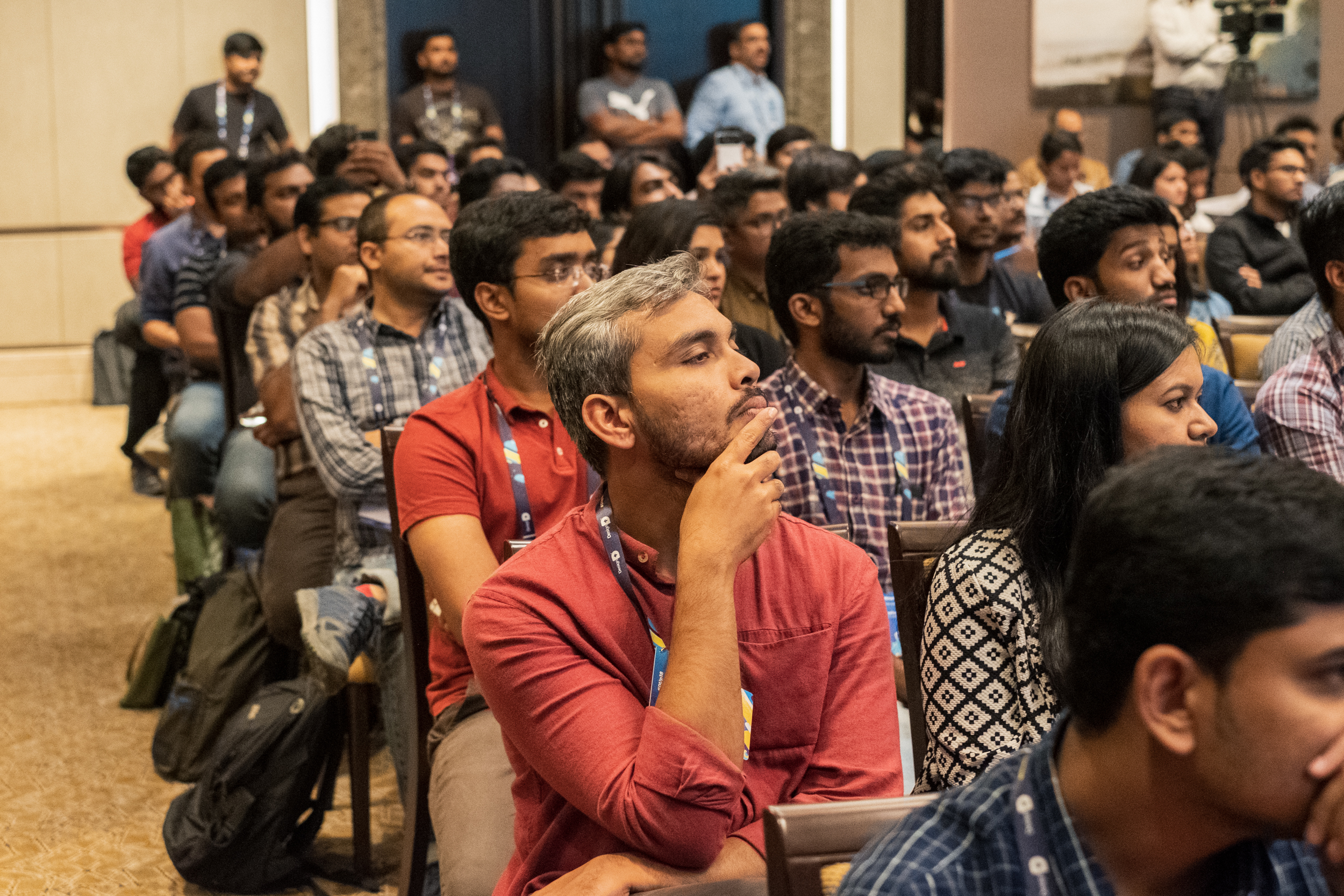 Why should students go to design conferences

Nikhil Yadav, final year student at IIT Rorkee, shares his experience as an attendee and DesignUp Scholar of 2018

It was June 2018 and tweets started rolling in from DesignUp twitter handle. At that time, I didn’t know much about DesignUp. As the number of tweets increased, FOMO hit in and I became anxious to know more about DesignUp. I searched google and then finally arrived on the Youtube channel where the team had uploaded all the videos of previous talks. I started watching and didn’t realize when I had finished watching all of them. I learned so much from those videos and thought how awesome it would have been if I had attended the event.

Now I started waiting to buy my pass for the conference. Passes were released, but they were too expensive for me. Even after the student discount, adding travel cost would’ve increased the burden on my pocket. So I thought it’s better to watch videos when they’re uploaded online.
In the meantime, the DesignUp scholarship form also rolled in where DesignUp was sponsoring the event for people who can volunteer for writing blogs, sketchnoting, recording event videos, and installations. Since I had already written some articles on my Medium profile, I applied in the Writing category. In mid-September, I got the confirmation that I’ve been selected for the scholarship.

Fast forward to now, after attending DesignUp 2018 conference, I couldn’t be much happier. It was more than what I had ever expected. I thank Jay Dutta and team for providing me this wonderful opportunity.

The DesignUp experience has changed my perspective about attending conferences and it compels me to attend every conference from now on. I want to share this perspective with all the students who wish to attend these events but haven’t been able to because of various excuses/reasons. I hope that my experience can help you decide whether you should go to a conference or not.

Excuses for not attending a conference

This was the biggest excuse I had for not going to the conference. I thought if the conferences were for learning purposes only then I could watch the recorded videos online and it would be the same thing. Fairly speaking now, I had dreaded watching videos by myself at home. The conferences not only provide learning opportunities but also the opportunity to interact with the speakers. You can ask your questions and clear any doubts after their talk.
I remember talking to Ben Crothers, a design strategist at Atlassian and amazing sketchnoter, about Design Systems during the last night’s dinner. He was so sweet and approachable. He cleared my doubts without any hesitation. I felt so good after interacting with him that I wish I’d interacted with other speakers also. I would not like to miss this chance in the next conference.

Apart from the talks, most of the learning happens in workshops where you get hands-on experience. I attended a writing workshop by Anshumani Ruddra. It was super fun and full of learning. Also due to less number of people in the workshop, I got to ask multiple questions. So If you think watching a video could help, you need to reconsider.

Having never attended such an event before, I thought I would be an alien amongst all these designers. Nobody would know me nor I know anyone else. To my surprise, when one speaker asked the audience how many were attending the event for the first time, almost 70 % raised their hand. I was as new as 70% people attending the event who were equally willing to interact with as many people as possible.

A more interesting thing happened when 2 designers whom I follow on Twitter called my name in the crowd before I remembered their names.

As Anjali Desai, Design Leader at Intuit said in one of the panel discussions, the world is small and Design world is even smaller. Every designer knows every other designer. So if you’re active on social media, there are high chances that people would know you. Thus, rule out the fact that you’d be an alien in the crowd.

For a student, these conferences can be expensive. But if you can manage the expense without going broke, you should definitely attend one. The money spent would be a worthy investment made for the 3 days of learning, experience, and networking.

Otherwise, Grab designup scholarship as I did. They will cover your 3-day stay and travel apart from free (and open) access to the conference — to its speakers, volunteers, backstage, speaker-dinners. Read more about it here.

Perks of going to a conference

One of the greatest perks of going to a conference is Networking. You get to meet and interact with loads of talented people. I got to meet my friends from social media, designers whom I follow and made some new friends. One day I was hanging out with UrbanClap design team and another day with Flipkart design team. It was super fun.

An interesting fact that I discovered during the conference was that two people who met each other for the first time at last year’s DesignUp were now married.

Conferences are a great way to build contacts which is difficult online. It gives you a chance to know and interact with your favourite design team. Bonus, You can later send them your resume. After all, you know the power of connections. Most of the design jobs are through the referral system.

During the event, I got the chance to interact with people from design teams including Uber, Adobe, Go-Jek, and Flipkart. I got to know how the team works and luckily I got their contact numbers and email ids too.

For me, this conference was more than just learning and networking. This 3-day event was an intriguing experience. First, the event held at a 5-star hotel, Shangri-La and second, It started with the musical ensemble of Congo drums and tambourines played collectively by the crowd to fill all of us with energy and excitement for the rest of the event. How can other conferences beat a start like this?

It was then followed by talks from designers across the globe. The music and sounds further made the event more captivating. The crowd was also a mix of people from across different countries. Interacting with them and listening to their stories inspired and motivated me. The sumptuous dinner and desserts were a delight. This I couldn’t have experienced at my home while watching videos.

Also I attended the event as a DesignUp Scholar, I got to stay in an amazing 4-star hotel for 3 days. I loved my hotel so much that I immediately sent snaps of it and my room to friends.

Finally, the awesome goodies and swag you get after attending the event is another perk for going to the event. You get to flaunt these goodies among your batchmates and friends.

Learning+Networking+Experience beautifully sums up a conference. It leaves you motivated and inspired to learn more than the usual stuff. Attending DesignUp was definitely worth it for me.

I would once again like to thank Jay Dutta, Narayan Gopalan, and Rasagy Sharma for beautifully managing everything for us and making our 3 days a seamless experience. I am now eagerly waiting for the next event.

Product Designer | Final year at IITR | I write about my design learnings and experiences | Articles from a student to a student.