Design can go beyond the boardroom into public squares, and tackle challenges facing sustainability, democracy and digital divides, as this visionary expert argues.

In a high-energy keynote address and wide-ranging interview during the DesignUp 2018 conference in Bengaluru, Ravi Naidoo, Founder of Interactive Africa and Design Indaba, provoked the design community to think beyond the usual boundaries of their discipline. (See Part 1, Part 2, and Part 3 of our earlier conference coverage).

“Design is too important to be left to designers,” Ravi said. Showcasing a range of inspiring examples that combine design with activism and a sense of broader purpose, Ravi adds:

Design can be used to improve the quality of life and to advance humanity, not just to service brands and make them richer

Ravi started off as a physiology student in South Africa, and later went on to study business. “The release of Nelson Mandela in 1990 was a galvanising moment to reinvent myself,” said Ravi, in a chat with YourStory.

He started the company Interactive Africa to launch projects and creative products in global partnerships with South Africa. He also launched the award-winning annual Design Indaba conference in Capetown in 1995, and a series of other initiatives in Africa and Europe.

Here are my eight takeaways from Ravi’s inspiring keynote and interview, on the importance of design in this day and age. See also YourStory’s D-Zen section for more insights on design impacts and frameworks.

Design can stretch your vision and shift the dial

“We want to dramatise Mandela’s vision for Africa. We want to bring the highest possible multiple to Africa, not the least common denominator,” he added, describing some of their initiatives. 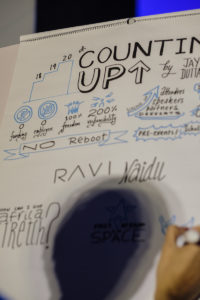 Over the past 25 years, Interactive Africa has helped the movement to re-imagine and re-invent Africa. For example, the company led the campaign to put the first African in space, Mark Shuttleworth, via a partnership with the Russian Soyuz programme in 2002.

The company also spearheaded the marketing bid to host the 2010 FIFA World Cup in South Africa. “I went to 45 countries as part of the lobbying effort,” Ravi recalled. Other upcoming initiatives of Africa Indaba include the Afrikea collection of African design along with IKEA, to be launched in 2019.

To shine the spotlight on Africa’s digital divide, Interactive Africa organised a motor rally in 1998 from the northernmost to the southernmost tip of Africa, called the Africa Connection Rally. At that time, a widely-touted research report showed that there were more telephones in Manhattan than all of Africa, explained Ravi.

The high-profile motor rally covered 15 countries in 22 days. It spurred the launch of telecentres for Internet access in a number of locations across the continent.

Can design give dignity?

In 2008, Design Indaba launched the 10×10 Housing Project to create low-cost houses made of sustainable materials. “We have released the designs as open source architecture for any African country,” said Ravi.

“Can design give dignity,” he asked the attendees at DesignUp. Other initiatives launched include campaigns against violence, the designER+ campaign for emergency response (ER) in Somalia, and YOURST (‘your street’) for better design of walkways including benches for the elderly.

One of Interactive Africa’s landmark projects in 2017 was appropriately called Arch for Arch, an arch-shaped monument to honour Archbishop Emeritus Desmond Tutu for his contribution towards ending apartheid in Africa.

The monument is made up of 14 arches of wood; the South African Constitution has 14 chapters, and the preamble has 14 lines, explained Ravi. The launch of the monument was accompanied by a nation-wide campaign asking citizens to reflect on what the constitution meant to them.

Design Indaba alumni have also contributed to the Tolerance Traveling Poster Show. The exhibition of posters is shown in public spaces, and not just in indoor galleries; it invites local artists to contribute their works on the theme of diversity and tolerance.

Ravi has served on the jury of INDEX Design Awards and IXDA Awards, but says it is important to focus on upcoming issues as well. “Don’t just reward the past, incentivise the future,” he urged.

Don’t just reward the past, incentivise the future! 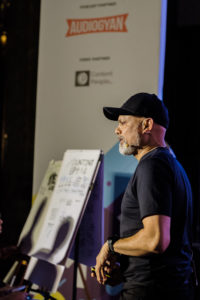 He envisions Design Indaba as a think-tank for three days and a “do-tank” for 362 days. “We are not impresarios. We are not a talk shop or a circus. We do more than keeping bums on seats,” he joked. His conference spurs attendees to take on impactful design projects for the year.

Another initiative that Ravi is promoting is the Museum of Contemporary African Art, the world’s largest museum dedicated to modern art in Africa. The stunning museum is designed by London-based Heatherwick Studio.

“Some of the design elements include the humble maize kernel,” explained Ravi. “Can design elevate cultural identity,” he asked the DesignUp audience.

Design and technology foundations should begin in school, according to Ravi. Unfortunately, the apartheid regime had removed education in subjects like mathematics from schools for blacks and coloureds.

This was redressed by Interactive Africa’s campaign called Hip2B2 (‘Hip to be Square’) and the launch of a syllabus for schools that positions mathematics and science as preferred school subjects with the power to open doors to a bright future, particularly in the fields of technology, science and engineering. “We want to make science sexy again,” said Ravi.

Ravi has also co-founded the data-only mobile 5G operator called Rain, to bring affordable Internet access to South Africans. “Just as rain falls evenly, so also Rain data should flow into every home,” said Ravi. Even the design of the logo is based on silver iodide colour, a chemical used to seed rain.

8. Design for the world

The motto of Design Indaba is “A better world through creativity,” and this shows in their recent international initiatives. Ravi was appointed as ambassador for Dutch Design Week 2018, and launched the Antenna young designers’ programme along with the Dutch Design Foundation. “Fresh design graduates from around the world showcase their outstanding work, network with one another, and connect to experts,” he explained.

A better world through creativity

World Design Weeks’ founder Kari Korkman and Ravi Naidoo have together established Design Commons, a platform to tackle the problems of urbanisation. The motto is “A better city is possible”, Ravi said. Other upcoming initiatives included ‘Design United’ with the United Nations, to promote sustainability goals at the global level.

In sum, design can be stretched up to and beyond the limits of the imagination. “Change is being accelerated even more due to digital innovations like robotics and AI. Leadership around the world is being challenged like never before,” Ravi said.

“We have to keep reinventing, and thus are in a state of permanent beta. To address these challenges, we are organising the YPO Edge conference on March 6-7 in Capetown, with the strapline Living la Vida Beta,” he added.

“Make yourself relevant to the movement addressing the world’s pressing problems. Think of citizens and communities, not just consumers and businesses. This is the Design Age, so think beyond the desktop or the boardroom. Design is not an island. Think beyond livelihood to legacy,” Ravi signed off, as advice to aspiring designers.